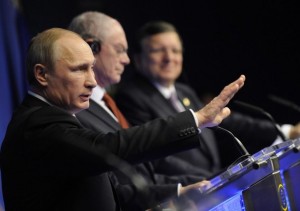 It was not a pretty democratic process when Mr. Putin was elected, but at least there was a process. Who elected you, Mr. Barroso?

It sounds like an impossible task – at least if you are in an area of the world with a minimum level of democracy. In the United States, the process is called an Executive Order and is issued by a directly elected President. In Europe, the process is called Revision of State Aid Guidelines for Environmental Protection and Energy and is issued by a European Commission, elected by – nobody.

On 22 January, the European Commission issued its package of energy and climate documents that in themselves have no effect on legislation, except for a legislative proposal relating to the EU Emissions Trading Scheme (ETS). In the days leading up to the publication, the media had been filled with headlines about the position of the EU countries, industries and speculation about renewable energy, CO2 and efficiency targets for the period after 2020. All major media outlets were in place that day in the Commission headquarters in Brussels and filed front-page stories about the likely direction of Europe’s energy and climate future.

Less than three months later, on 9 April, Competition Commissioner, Joaquín Almunia, in an almost empty Commission press room, published a set of new Guidelines, which effectively give Member States the choice between two forms of support for renewable energy: set up a market for trade in green certificates without technology differentiation or promote renewable energy through auctions. By handing the task of ending European feed-in tariffs and premiums to the competition branch of the Executive, negotiations were kept behind closed doors, without much scrutiny from the press and without any scrutiny of member states, the European Parliament or any other democratically elected institution.

With the guidelines, which take effect on 1 July this year, the Commission has singlehandedly ended a 15-year old debate over which is the most effective and cost-efficient way for Member States to support renewable energy in Europe. According to the State Aid Guidelines, the most cost effective ways are green certificates and tenders. This is a view that is not documented in any of the many communications, reports and analysis issued by the Commission’s energy services over the past 15 years. The energy services of the Commission has gradually been moving towards favouring feed-in premiums over the past years.

Ten economics professors warned the Commission that the changes would danger short-term efficiency and increase the cost of financing. “They advantage incumbents, create barriers to new entrants, and raise the cost of meeting the renewable targets,” the professors wrote to Energy Commissioner Günther Oettinger and Competition Commissioner Joaquín Almunia on 24 March. Similar concerns were raised by European governments in letters to the Commission, including from Sweden, which runs exactly such a technology neutral certificate system that the Commission seems to favour with its guidelines.

“One important point we would like to emphasise is the need to preserve the principle of each Member State’s right to design its own energy and environmental policy. It must continue to be possible for Member States to choose their preferred aid instrument, as long as the overall framework is respected,” the Swedish Energy Ministry wrote on 14 February. Many other countries made similar remarks, regarding Member State control. The Commission largely ignored them.

With the new Guidelines the European Commission is going against the explicit wish of Member States for flexibility; it is violating the 2009 EU Renewables Directive which explicitly allow feed-in tariffs, premiums and other systems a Member State may chose. The Commission undermines both primary and secondary EU law and the countries’ right to decide their own approach to meeting the binding national 2020 targets for renewables. It is even in direct conflict with the EU Treaty’s Article 194, which effectively gives each Member State a veto over EU energy policy. It goes against its own Communication from 2013 on Delivering the internal electricity market and making the most of public intervention and all the talk from Commissioners Barroso, Oettinger and Hedegaard about the importance of national control over renewables, delivered to the international press on 22 January.

The European Commission and its President has decided to regulate the energy supply to 500 million Europeans by decree – a process normally used by presidents or monarchs in authoritarian states. So congratulations! You just gave Mr. Putin a great reply for next time EU leaders claim that Gazprom is governed through presidential decrees (which it is). It was not a pretty democratic process when Mr. Putin was elected, but at least there was a process and the people elected him. Who elected you, Mr. Barroso?