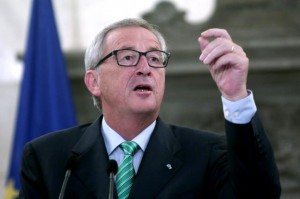 European Commission presidential candidate: “Energy efficiency and renewables are of paramount importance. (…) I am neither in favour of nuclear, nor in favour of fracking, because I think it leads to environmental problems we cannot afford. That is the wrong way.”

“People only accept change in necessity and see necessity only in crisis.” These were the words of Jean Monnet, chief architect of European integration. Thirty-five years after his death, this guiding principle still applies to European policymaking.

In the light of May’s parliamentary elections, which sent a record number of Eurosceptic politicians to Brussels, it can be debated whether the European people yet see the necessity of change in the form of ever closer integration.

Nevertheless, their elected representatives in the European Council certainly seem to move faster towards common European solutions when a crisis is knocking on the door.

This was true for the establishment of the European Coal and Steel Community in 1951; it was true with the eurozone banking union; and it was true when 28 heads of government unanimously agreed on the 2020 climate and energy targets, after Russian-Ukrainian disputes disrupted gas supplies to European consumers in 2006.

That is why Europe is now, at the peak of the Ukrainian crisis, closer than ever before to building a true energy union. In EU political terms, a union means that certain areas of energy policy would be made subject to qualified majority voting in the council. Today, decisions on energy require the unanimous consent of all member states.

The Ukraine crisis is the reason that such unlikely partners as Polish Prime Minister Donald Tusk and the Green Group in parliament have both made proposals. Tusk initiated the debate, calling for an energy union in a column in the Financial Times on 21 April. On 8 May, the European Greens called for states to “agree on a common set of policies on energy”.

Unsurprisingly, agreement between them ends there. The Greens want a policy based on energy efficiency and renewables, suggesting 2030 targets for greenhouse gas reductions of 60%, energy savings of 40%, and 45% renewables.

Tusk believes that the issue of energy security should be kept separate from the debate on a 2030 climate and energy package. Judging by the comments from energy ministers meeting in Luxembourg on 13 June, he does not have much support for that.

Meanwhile, the battle over the successor to European Commission (EC) president José Manuel Barroso is intensifying. The front runner, former Luxembourg prime minister Jean-Claude Juncker, is being publicly challenged by British prime minister David Cameron, who does not want to see this personification of an ever closer union appointed EU chief executive.

Juncker does not have an extensive track record in energy policy, although he too expressed the need for a “real European energy union” during the first in a series of “presidential debates” leading up to the parliamentary elections.

Should Juncker be selected (in the EU system, presidents are not elected) renewables proponents will keep reminding him of the other words he spoke that day: “I am neither in favour of nuclear, nor in favour of fracking, because I think it leads to environmental problems we cannot afford. That is the wrong way.” He also said: “Energy efficiency and renewables are of paramount importance.”

Cameron’s attack may partly be motivated by something Juncker said in a frank moment after the introduction of the euro: “We decide on something, leave it lying around and wait and see what happens. If no-one kicks up a fuss, because most people don’t understand what has been decided, we continue step by step until there is no turning back.”

That is almost an echo of another Jean Monnet principle: “Europe’s nations should be guided towards the superstate without their people understanding what is happening. This can be accomplished by successive steps, each disguised as having an economic purpose, but which will eventually and irreversibly lead to federation.”

This entry was posted in EU climate and Energy 2030 and tagged energy, energy union, Jean-Claude Juncker, renewables. Bookmark the permalink.